Over the last 20 years, technology has transformed the way we work. First came email and Microsoft Office. Next came instant messaging applications, such as AIM, Jabber, and Yammer. More recently, software solutions and apps have emerged for virtually every business process—payroll, business loans, digital storage, project management, and beyond.

Unfortunately, many businesses seem to love technology so much that they’re drowning in it. A recent study by Okta, for example, found that nearly 10 percent of businesses have more than 200 apps in their arsenal. Pegasystems Inc. reviewed 5 million hours of desktop activity only to discover that the average employee switches between 35 different apps more than 1,100 times every day! Further, a study from RingCentral concluded that 69 percent of workers waste up to an hour every day toggling between apps.

Switching between applications is a major time suck for any role, but even more so for the project manager, whose primary function is to keep their finger on the pulse of a project and monitor the progress being made.

The Downsides of Switching Between Applications

These are five negative side effects of a project management team continuously switching between applications:

Unfortunately, the project manager forgets exactly where said documentation is. They look through their inbox, and it’s not there. They can’t remember if it’s stored in a Dropbox repository—or a Box repository. The names are similar enough as it is. Was it in SharePoint? In a Google Drive folder somewhere?

The longer the search goes, the more likely the project manager will be to forget what they were doing in the first place. According to RingCentral, 56 percent of employees report that having to switch from one application to the next is disruptive to their workflow.

Hopping from one platform to the next and back again isn’t exactly the best use of time. When the average employee wastes as many as 32 days a year switching between apps, according to RingCentral, a company that employs 100 people will lose out on 3,200 days of work—or the rough equivalent of 12.8 full-time workers for a year!

What could your business accomplish with that many more employees?

Of course, time spent searching for information while moving from one platform to the next is time that can’t be spent on other important work functions.

Deploy too many applications across your enterprise, and you very well may end up decreasing productivity significantly—even though your investments in technology were ostensibly made to do the opposite.

Everyone knows how frustrating it can be to use technology. Maybe a new software-as-a-service (SaaS) program receives a buggy update, and performance takes a nosedive. Maybe you’re using a tool for the first time, and you’re struggling to figure it out. Or maybe a tool you’ve used forever got a face-lift, and now you don’t know where anything is.

Whatever the case may be, too much technology stresses us out—particularly when said technology is making it harder to do work.

Not only are stressed employees less productive, but they also make worse decisions and may get irritated to the point where they decide to look for a new job.

Most people probably can’t answer these questions off the top of their heads with any semblance of certainty. In the age of data breaches, this is a big deal—particularly for larger organizations that potentially have massive financial exposure in the event that they get hacked.

The more apps you have, the more likely you are to have apps that are collecting proverbial dust—and the bigger the chance that one of those apps might get breached by a hacker.

The good news is that it’s possible to largely avoid these issues by developing an enterprise architecture plan that helps your business meet its long-term goals.

How to Stop Wasting So Much Time Switching Between Applications

A solid enterprise architecture plan will enable your organization to figure out which applications are mission-critical, which are duplicative, and which can be decommissioned altogether.

In the world of project management, an organization seeking to solve context-switching problems may decide to invest in a project portfolio management (PPM) platform that enables project managers to find the information they need to do their jobs—in one location.

With the right solution in place, project managers will be able to view and manage all of their organization’s projects and programs in a flexible and adaptable tool that supports unique business processes.

The Benefits of Reducing Context Switching

Using a PPM solution, project managers can significantly reduce the amount of time they spend searching for information or moving back and forth between apps. As a result, they’re able to work more efficiently and help their organizations achieve their goals faster.

1. They make it easier to focus.

Project managers won’t lose their trains of thought as frequently because all of the information they need to do their jobs will be accessible in one place.

With more focus, project managers are able to move projects forward more effectively while ensuring their organizations deliver on their highest priorities and strict timelines are met.

To be fair, project managers will still likely have to toggle between a few applications. But almost certainly, that number won’t be anywhere near the 35 apps that the average employee is currently using today.

With a PPM solution, project managers are able to reclaim a ton of time that was previously spent clicking buttons on a computer or mobile device. It’s almost like you’re adding several new employees to your team—without incurring the associated costs.

Because they won’t have to move from one platform to the next any longer, project managers will be able to get more work done. With a robust PPM solution in place, all of a sudden, information that took forever to find can be tracked down in minutes—or even faster.

In addition to tackling their regular responsibilities, some eager project managers might decide to spend their newly found free time focusing on other kinds of endeavors—such as writing blog posts or supporting other company initiatives.

Any way you slice it, productivity increases—and the bottom line does, too.

Nobody wants their job to be any more difficult than it needs to be. Yet when you’re spending so much time looking for information and switching between apps—and you’re certain that there must be a better way forward—it’s not exactly the most inspiring experience.

Once these problems are solved, however, work becomes considerably easier. In turn, employee morale increases. As employees get happier, their enthusiasm rubs off on the rest of the team—creating a culture in which everyone is inspired to work hard and reach their full potential.

To avoid fines, keep sensitive data protected, and maintain a great brand image, organizations need to do everything they can to increase digital security. A PPM solution can help by reducing the number of data repositories that exist across the organization.

A lower number of repositories means a smaller attack surface—making it easier for your IT team to focus on preventing breaches because it has fewer apps to worry about. As a result, your enterprise network becomes more secure, which improves business outcomes and keeps trade secrets and intellectual property confidential.

If your organization has a context-switching problem, take comfort in the fact that you’re not alone. At the same time, just because every other organization is using too many apps doesn’t mean you have to do the same.

By developing a smart enterprise architecture strategy and consolidating where you can, your organization can give your employees the tools they need to thrive in their roles—instead of confusing them with countless, redundant apps.

For more information on how you can reduce the amount of time project managers spend hopping from one app to the next with PPM tools, check out our new 2020 PPM Summary Guide. 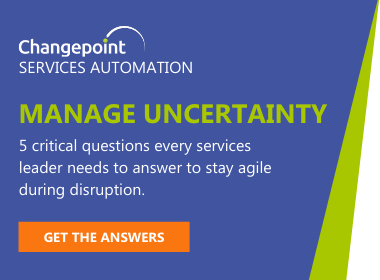